While Ratho Farm has been recognised since the 1970s as being home to Australia’s Oldest Golf Course, the farm’s history goes far deeper. It was in the 1930s, when Oxford University Press published the Reid family journals and letters as part of the Clyde Company Papers that the world first learned of Ratho Farm’s rich written record of colonial heartbreak and joys. From exiled Irish nationalists, to Melbourne Cup winners, bushrangers, 100-year-old gardeners, fierce political debates, golfing royalty and one of England’s best known artists; Ratho Farm has played host to colourful characters from all walks of life. All have left their mark for you to discover.

In the early 1800s, the new colony of Van Diemen’s Land was finding favour with emigrants looking to expand their opportunities on the frontier of colonial expansion. In the upper classes of landowning Scots, English, Welsh and Irish, it was the tradition that the eldest son inherited the earth (literally, the estate), second sons joined the military, third sons went into the cloth, and the offspring after that were often packed off to the new world with as much of the inheritance as they were afforded. 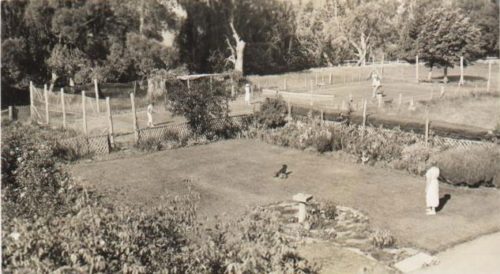 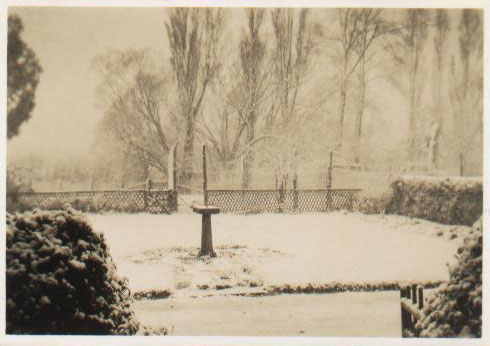 Alexander Reid of Ratho Bank Estate just west of Edinburgh (near the present day airport) had already seen his older brothers inherit the farm or the family brewery or take up military or religious rank. Together with wife Mary, young daughter Jane and infant son Alec, they settled Ratho Farm in the highland wilderness in 1822. They chose to band together with other east coast Scottish migrants who came out on the ‘Castle Forbes’ and were granted land on the Upper Clyde River, north of Hobart. The new village was named Bothwell, and still today maintains its Scottish flavour.

The Reids showed great dedication and enterprise in developing a successful farm on the Clyde River, and most of the existing farm buildings were built and utilised by 1828. In those days, settlers were issued a volume of free land and free convict labour based on the capital that they brought to the colony to establish their farm. Everything from shovels and door frames, to crockery, animals and private tutors, counted towards their first land grant.

The original grant was for 1400 acres with a mile of river frontage, and Reid constructed the original buildings including alterations to the original homestead by Scots mason Andrew Bell in the late 1820s or early 1830s. They sowed English grass and Reid was one of the first in Australia to use clover. He produced superfine wool from pure Saxon merinos and sold breeding stock to other settlers. He received the top wool price at the annual sales on several occasions.

After five years, settlers could apply for more land, based on the improvements they’d made to their first landholding. In 1828 Alexander Reid applied for more land and listed the following improvements:

A weather boarded stable and wool house 24 feet long by 12 feet wide, shingled and paved. A barn 32 feet by 16 of logs. A servants hut 18 by 12 of logs and lathed and plastered. Pigeon house and fowl house combined, of sawed timber and weather boarded, an octagon 15 feet high 36 feet round, with stock yards, piggeries and other outhouses…Besides a bridge thrown over the Clyde at my own expense.

Before emigrating, Alexander Reid had been a merchant in Edinburgh’s port town of Leith; and his offices were only a pitch-shot from the Leith Links, where the first golf societies were formed, and the first laws of the game were formalised. Reids neighbours were from other early golfing communities such as Aberdeen, Carnoustie, St. Andrews and Elie, so you’ll read in Early Origins, why it was only a matter of time before the Scottish settlers commenced golfing around the grounds of their colonial castles.

Off the back of some profitable years and a wish to educate the children back in Edinburgh, in 1837 Reid advertised the property for sale. The property was not sold and was leased to a Mr Horne for 1000 pounds annually, however Reid organised John Glover’s visit and painting of the Ratho Farm complex of buildings during his absence. The family stayed in Scotland till 1840 and returned to Ratho Farm at the end of 1842. 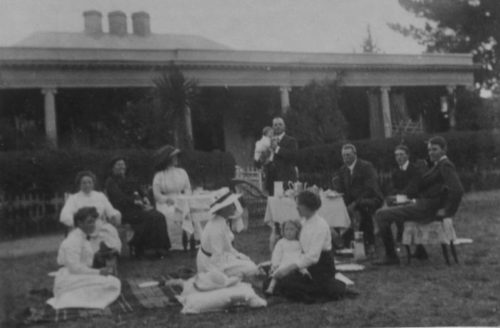 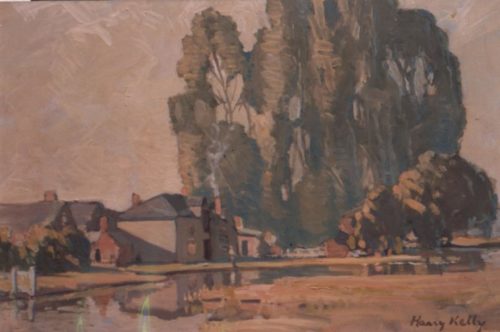 The second Alexander Reid ‘Alec’ lived all his adult life at Ratho Farm, improving pastures, extending irrigation schemes, raising a family and bringing Melbourne Cup winner ‘The Assyrian’ to stud. He became fierce friends with political prisoner (and neighbour) Young Irelander John Mitchel, and together with his sister Jane, kept an ongoing written relationship with him long after he’d escaped to America, been incarcerated by Abraham Lincoln, and right up until he was elected to the British Parliament as the Member for Tipperary.

Alex Reid died in 1881 and was succeeded by his son, the third Alexander Reid. The latest Alexander established a Red Poll cattle stud, a poultry stud and was active in formalising social golf in the area into a club, and hosting James Herd from St. Andrews, younger brother of US Open Golf Champion Fred, and Sandy Herd, British Open Champion. James is now recognised as Ratho Farm’s first golf professional.

In November 1935 he sold Ratho Farm by auction with the purchaser being Scottish emigrant and my Great Grandfather, Alexander Stenhouse. Stenhouse, born in Scotland in 1873, initially immigrated to Tasmania from London and worked for the agricultural firm Websters in Devonport for around 5 years. He moved to Melbourne to manage his cousin’s contracting business in Broken Hill and after six years he moved into business on his own behalf, buying butter and bacon factories, a gold mine near Penguin, an aspirin factory Astropin, and a produce merchant company A.F.Stenhouse Pty Ltd in Devonport. A mad-keen fly-fisherman, he purchased Ratho Farm as security for his Grand-children (and a base for his fishing trips into the Lakes). In 1946 added the adjoining property Logan to Ratho.

In 1948 Stenhouse died, leaving Ratho Farm in Trust to his daughters until their death. Ratho Farm operated under a series of managers from its purchase by Stenhouse in 1935 until its lease to my parents, Richard and Mary Ramsay (the grand daughter of Alexander Stenhouse) in 1982. Following their purchase of the adjoining Grantham property, in 1987 the my parents bought part of the original Nant grant excluding the house and 100 acres so that Ratho Farm is now run by my brother John Ramsay as an enterprise comprising Ratho, Logan, Grantham and part of Nant.