The Ratho Farm Golf Links were first laid out and enjoyed by the pioneering Reid family, who emigrated from Scotland and settled Ratho in 1822. It is Australia’s oldest golf course, and the oldest remaining outside of Scotland.

The Ratho Golf Links is a time capsule, among the best preserved of all the world’s early golf courses. Its most apparent uniqueness is the sheep, which graze and keep the playing areas short, with fences to keep them from the square greens.

At first glance, this appears to be little more than a backwards blend of farming and recreation outside a small country town. And so it is, but so golf began.

The significance of the Ratho Golf Links becomes apparent when studying early golf, which evolved on the east coast of Scotland. Musselburgh, Leith, Elie, Aberdeen, and Dornoch are but a few of the communities where the game evolved on the sandy ‘links’ land. They are also towns from where Bothwell’s first settlers were drawn.

Plantings of the game in Ireland, South Carolina, France, and even Estonia in 1767, had failed to take root. So, when the Reid family first left Leith and brought golf to the flourishing colony of Van Diemen’s Land— as Tasmania was then known—the sport had yet to establish itself outside its original base in eastern Scotland. 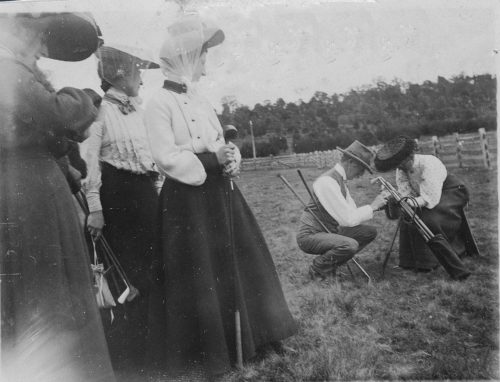 Watch footage of golf being

It is Australia’s oldest golf course, and the oldest remaining outside of Scotland.

As well as the Reids at Ratho, three other settlers around the predominantly Scottish valley laid out golf courses on their farms. In a rare arrangement, the Bothwell Golf Club initially rotated its events around all four courses. Four generations of Reids enjoyed the charm and challenge of the Ratho Links, and four generations of Ramsay’s family—since 1936 when his great-grandfather purchased Ratho for its fine trout fishing—have either enjoyed it likewise, or supported its ongoing use.

Ratho’s pedigree shines clearly from the era of feathery ball and long-nosed woods, sharing many traits with equally antique arenas. Square greens are still evident at St Andrews, where the vast scale and wild undulations hide the fact that their shape was originally set by the keeper of the green, who placed four pegs in the ground, and strung wire around to keep the messy sheep off. An early map of Prestwick, western Scotland’s first golf course, and original home of the Open Championship, shows its square greens. In the United States, too, pre-1930s photos of many courses display grazing sheep and square-cut greens, even the renowned Pebble Beach. These design principles were brought back from Scotland on fact-finding missions by the likes of C. B. Macdonald and A. W. Tillinghast. 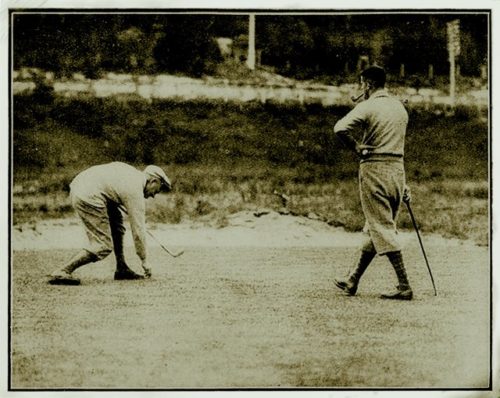 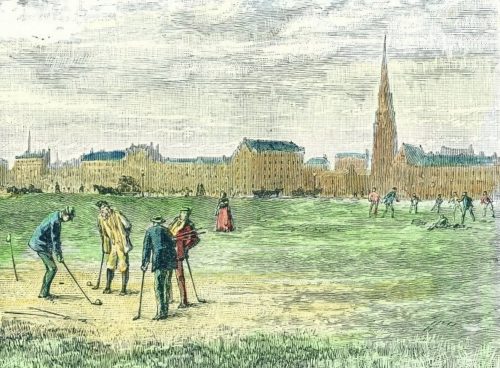 Another legacy to be found on early golf courses, certainly at Ratho, is that tees are hard up against greens. This originated from the rule of grabbing a pinch of sand out of the hole after putting out, and teeing off within two club lengths. Yet another similarity with ancient Scottish golf was that golf at Ratho was abandoned over summer for the same two reasons that early Scottish golf was a winter game: the late-spring/summer growth made the grass too long and rank for sheep to maintain to a ‘ball-finding’ standard. Secondly, the gentlemen golfers had the busy harvest period on their farms. It wasn’t until the 1980s, when summer twilight competitions were introduced—’Chicken-Runs’— that golf was played in summer at Ratho.

As well as Ratho’s above-ground originality, it still distinctively plays like early golf. The lack of automatic watering preserves the varying challenges through seasons: hard and fast in summer through autumn, frosty and firm in the winter, before softening up with the lush green of spring. Limited tree planting through the years ensures the ever-present wind from different directions demands varying lines of attack and shot-making.